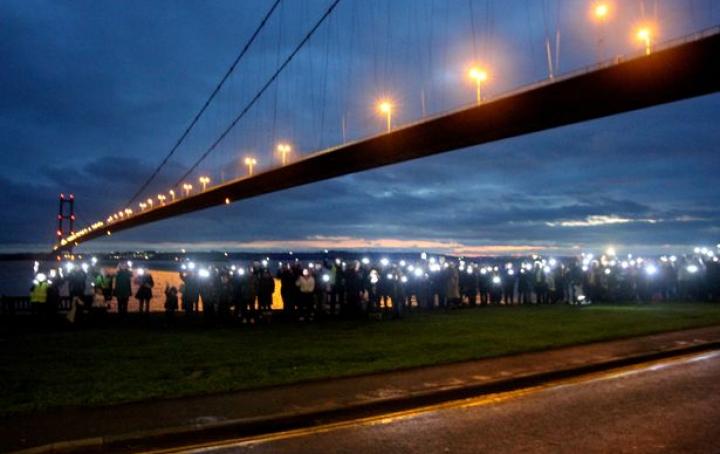 More than 150 mums, dads, grandparents, siblings, aunties and uncles lit up the skies of Hessle Foreshore on Sunday night to honour the babies they have lost.

Members and users of Hull and East Yorkshire’s Sands stillbirth and neonatal death charity gathered outside the Country Park Inn from 6.30pm armed with torches, and walked in a group along the shore’s edge to raise awareness of Baby Loss Awareness Week.

Baby Loss Awareness Week takes place in the UK every year from October 9 to 15, but the pain families go through at the loss of a child lasts forever.

Maggie Simkiss founded the region’s branch of the Sands charity in 1992, after the death of her young son.

Now, 27 years later, families who need vital support when they experience baby loss have somewhere to grieve and get help.

“This is the second year we have done the walk, and it’s our way of shining a light on Baby Loss Awareness Week,” said Maggie.

“Our next fundraiser will be for a memorial tree in Hull, made of metal, with the names of the babies who have been lost engraved on metal leaves, so they can be added to the branches and people will remember them forever.

“Just because they aren’t here, doesn’t mean they’re not our children still.

“When I lost my son, there wasn’t any support out there. It’s only been three years that Hull has had bereavement midwives in place at the hospital.

“Now parents and families who have lost their children are given leaflets on where to find help straight away, and we are on hand to support them.”

Hull Sands holds monthly support groups, where anyone affected by baby loss can meet up and speak about coping mechanisms and what they are going through.

There are also befrienders on hand to offer one-to-one support to families, and hold parties for siblings who have also been affected by loss

One of the charity’s newest ventures is a football team, Sands United Hull and East Yorkshire, which is aiming to promote the mental health of men affected by baby loss.

Craig Spivey became involved with Sands in 2007, after the death of his younger brother, and has helped set up the football team.

The 25-year-old said: “We’ve only been running for 13 weeks, but we’ve got 12 members and we’re always looking to welcome more.

“I saw other branches of Sands had seen success around the country, and hopefully our football team can benefit others.

“The team is mainly about raising awareness, but also somewhere men can come and speak about what they’re going through.

“If you look around there are not as many men here as women, and men’s mental health is a big topic at the moment.

“Those who want to come down don’t have to talk about what they’re going through, they can just play football, but sometimes the men don’t realise they are actually talking about their feelings.

“We have had some people who have burst out crying for the first time, because they can finally talk with men who have this common bond.

“It’s also a great way to meet friends and get out of the house, which is always difficult when something as awful as losing a baby has happened.

“It’s free to take part as well. We’re conscious we don’t want to leave out people just because they can’t afford the fees to play.”

Baby Loss Awareness Week will end on Tuesday, October 15, with a wave of light taking place around the country

This will see households that have been affected by baby loss light a candle in their window.

Anyone interested in signing up to the Sands United football team can turn up to Goals in Clough Road on Sundays at 7pm, or follow @sandsunitedHEY on social media

Do you need support?

Our local support lines are staffed by volunteers - if you can't get through and need support now, please contact Sands Support below.